Version 1.8 of Tag Groups Premium is a major update that brings you a new feature that has been requested many times: The possibility to assign the same tag to several groups. 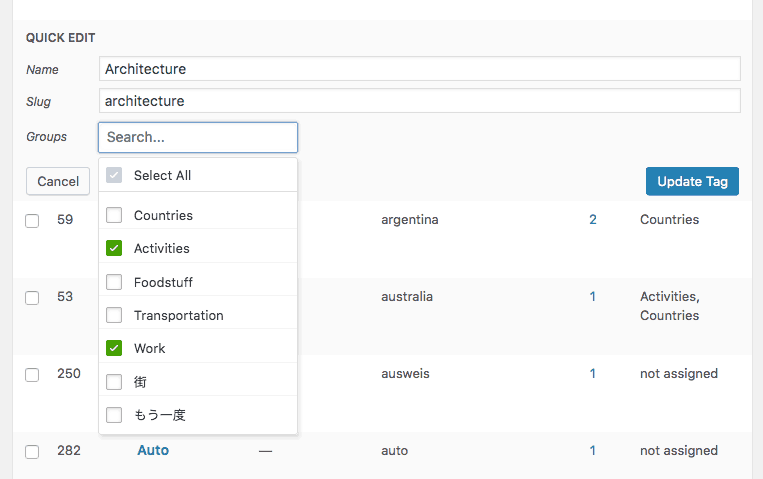 Version 1.8 of Tag Groups Premium is a major update that brings you a new feature that has been requested many times: The possibility to assign the same tag to several groups.

You probably came across cases when choosing the right group for a tag was not an easy task. And often you want to have different variants of the same tag that lead to different posts.

Starting from this version, you can assign tags (or other non-hierarchical terms) to multiple groups. First, when you edit a tag, you define a set of groups for that particular tag. Then, when you tag a post, you choose which of these groups the tag belongs to in this context.

The tag clouds that come with the Tag Groups (Premium) plugins are aware of the difference (to turn this off, add the parameter add_premium_filter=0 to the shortcode). “Mel Gibson” may show up under “Actors” and “Directors”, but when you click on the tag under “Directors”, only the posts will be listed where “Mel Gibson” was used in the “Directors” group.

Update: This default setting has later been reversed since most users don’t need that feature. So, if you should need it, just add add_premium_filter=1 to your shortcode.

On most1 WordPress pages that show lists of posts, you can filter that list by tag (term) group. Simply append the query parameter “term_group” with the group’s ID to the URL of that page. For example, if you list the posts on the front page and want to show only those with tags in the group with the ID 3:

You can also filter additionally by a term and show only posts that use this term in a particular group. In that case, use both “term_group” and “term_id”. Example:

Please note that if you want to filter by tag and group, you alway have to use both “term_group” and “term_id”. It is not sufficient to use only “term_group” on a tag archive page.2

With this release the group data has naturally become more complex; in fact, too complex to be saved as a number with the tags. That means that before using them, all tags and posts need to be processed. Nothing will be deleted, but only some information added to the term and post meta – which is a part of the WordPress engine anyway so that editing and searching is very fast.3

When ever you save a post or tag, this information is automatically being updated and you don’t need to worry about it. Only if you create or change tags or posts while the plugin is deactivated, or if you import content, it might be necessary afterwards to re-process the new items. That can be done with a button (“migrate”) in the settings, under “Support”. Only items will be processed that lack the new term or post meta. If this processing remains unfinished, you simply push the button again.

When you save your tag (term) data, Tag Groups Premium will also update the fields that are necessary for the free base plugin to operate. This makes sure that you can always downgrade from the premium to the free version. Naturally, the premium functionality won’t be available after downgrading and each tag will return to its previous limitation to have one group only (i.e. keeping only the first of the groups).

The minimum WordPress version is now 4.4 (previously 4.0). If you are one of the few people who still stick to an outdated version, please do update now. The reason for this change is the use of “term meta”, which was introduced only with WP 4.4.

You can get the new release at Freemius or through the automatic update from your admin back end. As usual, former buyers receive the update for free.

Please make sure that you also update the free Tag Groups plugin to its latest version so that all features will be available.

This animated and filterable tag cloud is the Shuffle Box. It is available with my plugin Tag Groups. Sort your tags into groups and tidy up WordPress site. 🧡